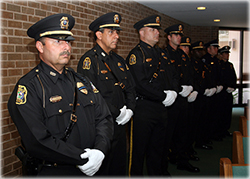 The Venice Police Department has a long tradition of sending representative officers to the funerals (anywhere in the state) of our fellow brothers killed in the line of duty. Over the years, this much too frequent exercise has been a cause for reflection and concern. As a result, it became evident that the department was unprepared to handle such a tragic event if it were to happen within our own ranks.

This prompted talk of someday establishing a permanent Honor Guard Unit; a permanent unit that would eventually be able to provide a dignified farewell in the unfortunate event it was called upon.

This unit made its debut at the 2001 Florida Police Memorial Ceremony in Tallahassee. Shortly after, the tragic events of September 11, 2001 underscored the purpose for a department honor gaurd. Due to a renewed sense of patriotism, the unit was called upon to present colors at various venues and ceremonies in the community. In November of 2002, the Honor Guard Unit participated in the annual Venice Christmas Parade fo the first time.

Under Florida law, e-mail addresses are public records. If you do not want your e-mail address released in response to a public-records request, do not send electronic mail to this entity. Instead, contact this office by phone or in writing.