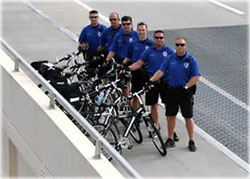 Officer Dan Schuler was the only officer using a bike during the past two years. Now, as one of six bike patrol officers, he says “anytime it’s possible we park our patrol cars and go on the bikes. We are definitely more approachable."

Because the bikes allow for more interaction with the citizens, it is a good way for police officers to learn what law enforcement services are desired by the people who live and work here.

"This is another way of getting out in the community and fighting crime,” Retired Chief Tom McNulty said of the unit that is part of his COP (Community Outreach Program). “The bikes are stealth and officers are eager to use them in many capacities."


Under Florida law, e-mail addresses are public records. If you do not want your e-mail address released in response to a public-records request, do not send electronic mail to this entity. Instead, contact this office by phone or in writing.