Governor DeSantis' Executive Order 20-91 requires all persons in Florida to limit their movements and personal interactions outside of their home to only those necessary to obtain or provide essential services or conduct essential activities. This order went into effect at 12:01 a.m. Friday, April 3, and expires April 30.

For up-to-date information regarding Coronavirus, visit

- Aviation played a vital role in the development and economy of the city after the Florida land boom of the 1920s, during World War II, and throughout the years that followed.

-The first recorded flight to Venice delivered fresh strawberries to Hotel Venice on January 13, 1927. That aircraft landed on Nassau Street.

- Dr. Fred Albee, the renowned orthopedic surgeon, was a pilot who recognized the value of a community airport.

- He donated land, near the current sites of Venice High School and Venice Avenue Bridge, where the Civil Aeronautics Authority and the Works Progress Administration constructed markers for the sod runways in January 1936.

- Later in the year, the Fred Albee Municipal Airport was dedicated with much fanfare. Albee purchased a five‐passenger aircraft and hired his nephew, a pilot, to fly his patients to his private orthopedic hospital in Venice known as Florida Medical Center. A hangar, offices, flight training school and repair shop were completed at the grass airfield in 1939.

- With the war over, the city was granted a license to operate the airport on May 20, 1946. On June 10, 1947, ownership of the airport was transferred by quit claim deed from the United States of America to the City of Venice under provisions of the Surplus Property Act of 1944.

- Many of the pilots who trained at the base later returned to Venice, where they became 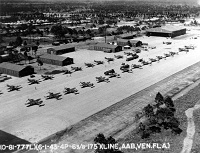 - Besides providing the land and much of the infrastructure that is still in use today, the airport was the founding home of the Venice Little Theater (today known as Venice Theatre) in 1950. It operated there until 1972 when it relocated to its current downtown location.

- Hill and Hill Plumbing also got its start on airport property and is still in business today.

- The former VAAB chapel building was relocated to become the first building to serve as Epiphany Cathedral.

- The Triangle Inn accommodated many servicemen and their wives when it was operated as a bed and breakfast.