Governor DeSantis' Executive Order 20-91 requires all persons in Florida to limit their movements and personal interactions outside of their home to only those necessary to obtain or provide essential services or conduct essential activities. This order went into effect April 3 and expires April 30.

For up-to-date information regarding Coronavirus, visit

NOTE: This beach park is currently closed to the public in an effort to stop the spread of COVID-19 (coronavirus)

Brohard Park, the beach between Airport Avenue and Caspersen Beach, is named for Smyth Brohard, who served and mayor of Venice from 1958-71. It runs from the west side of South Harbor Drive, from Beach Road to city limits.

Maxine Barritt Park is named for community activist, Maxine Barritt, who lobbied to have a passive park on the site.

Service Club Park is so named because it was built with volunteer efforts and funding of the city's many service clubs, such as Rotary, Sertoma, Lions and Kiwanis.

The Robert E. Clark Beach Pavilion is named for the first surveyor who worked for the Brotherhood of Locomotive Engineers when the city was built. 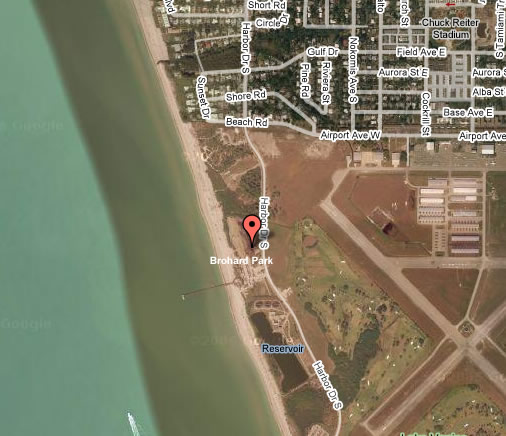